From time to time, I like to deviate from the two main topics of this blog (BBQ & Beer). This is one of those times.

When I am not filling my belly with pork fat and brew, or sometimes while I am, I enjoy managing a little fantasy football. As a general rule, I suck at fantasy football. I have been doing it for a decade in two leagues. The result? One league title, a handful of division titles, and a second place finish. That’s in 17 combined fantasy seasons. Like I said – pretty crappy.

Still, all that exposure to fantasy football has given me some perspective. I have a theory unencumbered to date by data: Kickers are worthless.

My thesis is based on several presumptions:

3. Eliminating kickers would add more skill to the league, by virtue of eliminating the random kickers

4. The difference between the #1 kicker and the #12 kicker is negligible

5. I hate soccer, and the kicking game is basically soccer encroaching upon American football

I am not alone. Here is a great article on ditching the FFL kicker. This is another one, from a guy who hates the D/ST as well (another position I would chop).

[Quick Disclaimer: I am not a statistician. Errors are bound to be here.]

I advocated for eliminating the kicker from one of my leagues for the 2012 season and beyond, and was challenged by some leaguemates to defend that position. This post is that defense.

Start with the kicker scoring. You will note the absence of TDs, yardage, points for a reception or pass, etc. 99.99% of the time, unless some insane once-an-NFL-season play is called and then executed successfully. Totally lame. Do these guys even consider themselves football players?

This is how ESPN ranked the top 18 kickers going into the 2011 season. I have add their final rankings (where NR = not ranked, here in the top 18), their preseason auction value, the final score (under the above rules), along with their team. Note that Kickers ranked after 11 are literally worthless.

2011 Placekickers… what a waste of my time

In all fairness, Nate Kaeding tore his ACL on the first play as a kicker, which is actually pretty incredibly lame since he is a damn placekicker. His replacement finished 13th. Still, we can throw out his drop from a preseason rank of 1 to being not ranked.

Seven of the final top 18 kickers were not ranked in the top 18 going into the season, including 2 of the top 5. Of the top 5 to end the season, only Gostkowski was in both top 5s. Being a Patriot, he’s probably cheating horribly somehow… somehow.

No, I’m still not over SB XXXVI

Besides the freak show of David Akers scoring way more than anyone else in 2011, the difference between PK #2 (Kasay) and PK #13 (Novak), who should not be on a roster when 12 teams are in the league, is 19 points. Over a 16 week NFL season that’s a hair over one point per game. One.

Again, Lawrence Tynes and Jeff Reed were both literally worthless yet worthy of starting in a 12 team league. Think about that.

Way to go, David Akers! The only one who stayed in the top 5. Among the top 10, only two stayed. That’s two straight seasons where a single top 5 preseason kicker actually finished in the top 5, and where two of the top three and the top overall were not even ranked going into the season.

Seabass’ amazing season where he went from unranked to PK #1 gives you a 38 point swing over free agent PK #13, ironically the preseason favorite in Nate Kaeding. While that is two points per week, the difference between PK #3 and PK #12 is a shade over one point per week. Hardly worth losing a sweat over. Even in an amazing season, PK #1 gives you a two point per game advantage over the team with the worst placekicker. Draft well and the randomness of the PK is eliminated.

2009 was a little more respectful of preseason rankings. I went away from ESPN for some variety, and these guys put the kickers into Tiers rather than assign an auction value, with six total tiers: 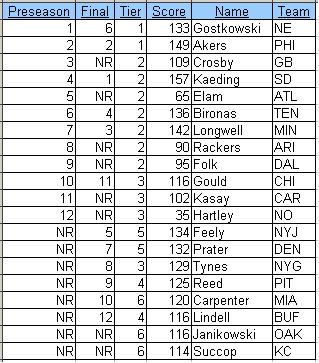 Yet again two unranked guys finish Top 5 with four in the Top 10. And this was the most consistent year I reviewed.

Kickers 11-13 put up 116 total, while Nate Kaeding scored 157, a difference of 2.5, which is a big jump from the 2010 & 2011 numbers. Still, the chance of hitting that guy is low. If you drafted Gostkowski as the first kicker off the board, you would have been exactly one point per week better off than unranked Tier 6 scrubs Carpenter or Janikowski. That’s hardly worth the early pick.

It’s worth noting that in the cases of Elam, Hartley, & Folk in 2009, the respective teams employed multiple kickers for a variety of reasons. This may have resulted in better year-end rankings for those kickers, but the results are the results.

On the issue of week-to-week consistency, my theory only holds up slightly. When semi-randomly picking a kicker, I look for the guy who is going to rack up tons of XPs as opposed to lots of field goals. The idea is consistently good offenses will give 40-50+ extra points along with enough field goals to boost all the drives that end in 6 points (for the team) instead of 3 points. Some people prefer the long leg school of thought and get the guys who attempt a dozen kicks over 50 yards during the season, prototypically Sebastian Janikowski.

David Akers, on a really good 49er’s team, and the aforementioned Janikowski, on a mediocre-at-best Raiders squad, finished 1st and 3rd, respectively, in the above league scoring. Here are their weekly scoring profiles:

Akers was far more consistent than Janikowski. The Raiders kicker was shut out once and put up a score of 5 or less 4 times. When he was on, though, he put up a handful of double-digit scores. Akers, on the other hand, rarely deviated from a consistent range of 8-16. This is both reliable and productive. But… he was not ranked in the preseason, despite being the #2 kicker in 2009 and 2010, and was valued at $0 in an auction.

I suppose the lesson here is that some kickers are consistently productive, but it’s a complete crapshoot to know who it is. Why do we tolerate this? Why do these guys even get to wear jerseys?

Does having the top kicker have anything to do with winning championships? I presume the answer is no, but I am willing to look into it. As I mentioned above, I am in two leagues and should have 17 years’ worth of data on this, but only one keeps the past rosters available.

Only once did the champ in this first league have the best kicker, and that was in 2003, our first year in the league’s current scoring and 12 team formats. I have no reason to believe that it’s no different in my other league.

From this half-assed analysis, I can draw a few conclusions:

1. Preseason kicker rankings have little correlation to final year-end kicker rankings based on actual results, making drafting a kicker strategically as effective as picking one blindly.

2. The difference between the top performing kickers and the mediocre, borderline free agent kickers is nearly negligible, in the range of 1-2 points per game.

3. For some (though not all) kickers, scoring on a weekly basis is sporadic and unpredictable.

4. Having the best kicker, or even a good one, has little to nothing to do with winning a league title.

5. People draft for TD, yardage, etc, not for kicking. If all draft guides and strategy books marginalize kickers by stating that they are a last-pick-only type of player, then why the hell do we even bother with them.

Some traditions need to go. Fantasy football kickers are such a tradition. Kickers suck and take up a valuable roster spot that I can squander on the likes of David Carr, William Green, Tim Rattay, Lamont Brightful, Onterrio Smith, JP Losman, and all the other clowns I’ve had on my pathetic team.

Using anything other than your last pick on a kicker should be a bad beer and possibly a beating with a rubber hose.