WordPress gives me all kinds of goofy stats about how people found this blog.

For a while, I tried to keep tabs on visitors from across the globe with a running tally of country visits. I have been found more often lately, making that endeavor too cumbersome. Below is my initial attempt, though the map here gives a more comprehensive view. 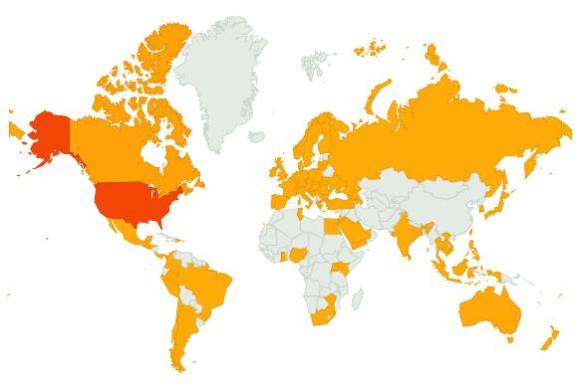 Here’s the updated map through March 2014, a little over two years since my first post: 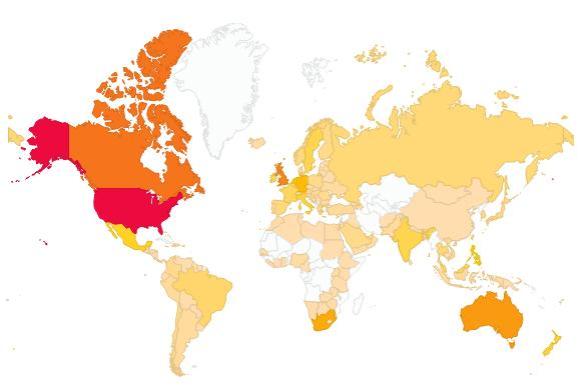 Even more since the last screen shot

I’ve had visitors from around the world, which is pretty cool. Though I may have missed a few, here are the countries that have visited Simpson BBQ and their first date (that I noticed them):

April 2: Italy. So many great memories of my trip to Rome. It was only a few days, but it was excellent. Everyone was amazingly polite and kind, even when being rude to us ugly Americans.

April 3: Korea, (the one with the Internet)

April 12: United Kingdom (Where have you been?) I spent one of my most favorite weeks ever in England, mainly in London and the Surbiton/Kingston suburbs. I had more Youngs / Fullers and horrible bar food cod fish than you might think possible. I even found time to attend a trial as a tourist – a prison beating. It was great.

April 16: France! Bonjour, thanks for visiting! My trip to France in spring 2004 was the culmination of six years of studying your language. Quickly, let me sum it up. Everyone, and I mean EVERYONE (who was French), in Paris was a monstrous asshole. Once I left Paris and hit Normandy, everyone was amazingly polite and the countryside was like something out of a novel. The best meals I ate in France were, in order, (1) some Italian dive behind Notre Dame Cathedral, and (2) some Argentinian steak house. The nicest people we met in France were, in order: (1) Texas guy at US cemetery in Normandy, (2) Brits at Irish pub, (3) Brits at Arc de Triomphe, (4) Italians at restaurant, (5) others who were not French.

April 22: Romania, probably because of all the insight I provide on Olympic gymnastics and the use of pork in training.

April 26: United Arab Emirates? Someone there typed خوخ شجرة as a search term, which Google Translator tells me means “Peach Tree”, into a Google Image Search, and somehow that person came to my site. So odd.

May 2: Georgia, the country, not the US state. This is one of the more “huh… wow” hits for me so far. Juh-juh-juh-juh-Georgia’s always on my mind! Not really. I haven’t thought of the country Georgia since, well, I guess the last time I heard that Beatles song. I can honestly say the following: (1) I could not find Georgia on a map in less than 10-15 tries, (2) I have no idea what language you speak there, and (3) Welcome, Georgians! (… is that what you people call yourselves?)

May 3: Aruba and Tunisia. What? Also, happy birthday, Mike!

May 6: Philippines, and Hong Kong? Isn’t Hong Kong the same thing as China?

May 10: Netherlands… is it just Netherlands or do I need a “The” in front?

May 13: Happy Mothers’ Day (US) to the Russian Federation and Colombia!

May 16: New Zealand and Indonesia.

May 18: Finland! I hope you found my BBQ Ox Tail recipe instructive. Didn’t know you had oxen up there. I thought it was all moose, reindeer, and snow monsters.

May 23: South Africa. I have a sister-in-law from South Africa. All I knew about that country before meeting her came from two movies: Zulu Dawn and District 9. She found that statement somewhat unflattering / annoying., as I guess neither paints an accurate picture of things there today. Who knew.

May 27: Bahrain. No idea where that is, but glad to see you.

May 28: Turkey. Glad to have you. I plan to cook a turkey on the Big Blue smoker soon, something that would probably interest you.

June 11: Ghana? (Arrogant American time…) Where the hell is Ghana?

June 17: When your feeling a little Hungary, you hit Google with some BBQ search terms from your kitchen in Eastern Europe.

June 19: Sri Lanka? What global appeal I have.

June 20: Austria, where the hills are alive with the sound of pork fat sizzling

As of mid-summer 2012 I was #1 on Bing and Yahoo! for the search term “unsightly industrial refuse” as a result of this post. I haven’t checked in a while. Hundreds of people have typed in some search terms looking for help in making a 55 gallon steel drum into a smoker and found my blog.How cool is that?

A half dozen or so people have typed in Big Flats and found my blog. I’m sorry. For some reason Bing values my comments on the subject very heavily. Perhaps it’s because I have a high school classmate who works at/on Bing. No idea.

I have lots of searches for bacon-wrapped pork tenderloin, smoked brisket, and parboiled ribs. Awesome.

Not as awesome was the crushing that I got for parboiling ribs by a BBQ enthusiast message board. I can handle criticism like a big boy.

One of my most proud stats is based on an anti-scam post about a solicitation disguised as an invoice. As of March 15, 2012, over a dozen people have searched for some term relating to the sketchy scamaroo document that they got in the mail relating to their trademark. If just one of you tossed it in the trash, it’s worth my time.

Whomever searched for “lump just below the sternum” on April 29th needs to just go to the doctor. Proof that the internet is not a substitute for person-to-person medical advice is evidenced by the fact that Google sent you to my post about pork spare ribs instead of WebMD or something like that.

Thanks for reading and for passing this along. I will update as the site stats warrant.

As of March 2014, here are the countries that have provided the most visitors, in order:

After US, big dropoff, then after US & Australia, another big dropoff

And I’ve seen a single visitor from each of these places:

Not as popular in Algeria