Smoked Tofu: Oh God What Have I Done? (Don’t Try This, Please)

Initial Disclaimer: This was an awful BBQ experience. The purpose of this post is to disabuse you of the idea of ever trying this nonsense. Sweet Lord Jebus don’t do this. Never. No. No no no.

Hey, so I had a vegetarian coming over for a BBQ, and I thought, “Instead of doing the usual BBQ vegetarian routine of portobello mushrooms and sliced yellow squash, why not try something new? Why not try to smoke some tofu?” All aboard the Fail Train.

I went out and bought a large cube of extra firm tofu. I’ve had really, really tasty tofu. I’ve had it on tacos and in numerous Chinese dishes and it’s always been well-prepared.  What is it? Well it’s watery soybean curd, of course.

So the first step is to put a plate or some kind of weight on it and slowly let gravity press out a bunch of the water. From there, I patted the loaf dry and cut it into five rectangular segments. The tofu was rubbed it down with olive oil and a hearty dose of pork belly rub on all six faces. Onto the Weber 22″ it went for indirect smoking with apple wood. Fail imminent.

Smoke each side for a good 20-30 minutes, and then glaze 3/5 of them with some Sweet Baby Ray’s BBQ sauce. What could go wrong?

This actually looks somewhat appetizing. Oh, how looks can be deceiving. 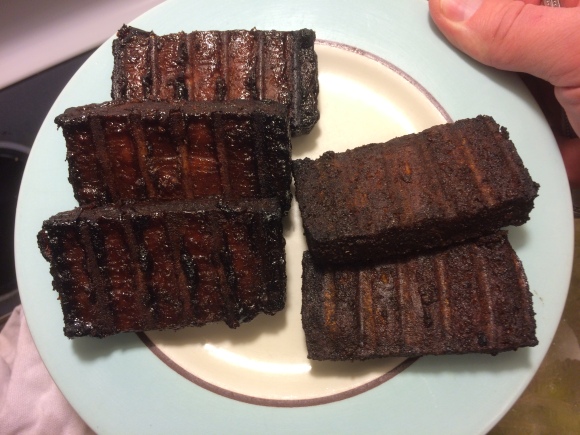 OMFG this is heinous. The outside was a bitter hard rubber thing that was like biting into a superball, but underneath was a curdled even-more-bitter rancid pudding. I tried both – basted and unbasted. Neither was good. They were so bad I wouldn’t give them to the dog, who is usually sitting and salivating over BBQ as we slice actual meat off the grill.

I gargled and rinsed with so much high IBU beer, but that didn’t even do it. Full brushing and mouth cleansing was needed to purge this feculence from my face. Sweet lord who thought this was a good idea. This vegetarian friend can eat mushrooms and squash and be happy with that nonsense. Pass me some rib meat.

This belongs in the trash, which is where it went. Never make this. Ever. Eat meat.