Pork steaks, the 1″ or so slices of a Boston Butt (pork shoulder), are a St. Louis institution. A “true” St. Louisan would cook the hell out of them over direct heat and then chuck them into a bath of Maull’s BBQ sauce and Budweiser to simmer for a while. When I say direct heat, I mean a generous pile of charcoal lit by lighter fluid until the grill surface exceeds 500 degrees, only to be cooled by spritzing Bud Light onto the flames. Serve with corn on the cob, vinegary slaw, and gooey butter cake.

It’s one of those tastes / mouthfeels that pulls you to a time and place in your past. Oppressive August heat and humidity, standing on a zoysia grass lawn in swim trunks while a sprinkler mists you and your siblings and neighbors. Your feet are covered in grass clippings and mud from your trip down the Slip n Slide, half of the spraying nozzles shooting in weird directions. Beer cans still had pull tabs. An ice cream truck is audible but not visible, having stopped off at some other family’s summer BBQ. Your uncle has opinions about unions and urban crime that he only shares once he’s full of light beer. An overloaded wax paper plate barely contains all that food, a swirl of sauce and slaw dressing drips on to a card table with a ripped yellow foam and plastic pleather top. Patterned too-thin napkins do a poor job of cleaning the sauce off your face. The meat is dried out and over tender, but the Mets are pond scum, and dammit it’s tasty. Sip on some orange Vess soda.This is an STL summer BBQ in the late 80s.

Just a few weeks ago at the Webster Groves carnival, I re-sampled the traditional STL pork steak. While nostalgic, it’s an experience best left in the past. 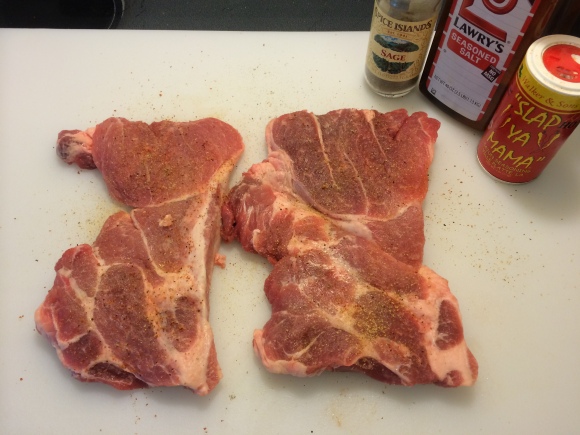 Only the finest pork steaks from Schnucks

A couple pork steaks were well-dusted with Lawry’s Seasoned Salt, given a nice sprinkling of dried sage, and conservatively added a few shakes of Slap Ya Mama, a spicy seasoning souvenir from my trip to Florida last year.

Since bacon-wrapping whole pork steaks might be tricky, given their size and shape, I elected to cut them in half before wrapping.

I experimented both with and without water-soaked bamboo skewers. It turns out that they were unnecessary.

In a Weber 22″, I set up for indirect smoking with a 1/2 chimney of Kingsford charcoal and apple wood chunks. The lid should be oriented so that the vent is open and over the meat, so the smoke and heat must be drawn past the pork as it leaves the grill. This ensures lots of smoke flavor and even cooking.

Grill set up, ready for smoke

After about 30 minutes, I checked on the pork steaks and flipped them. 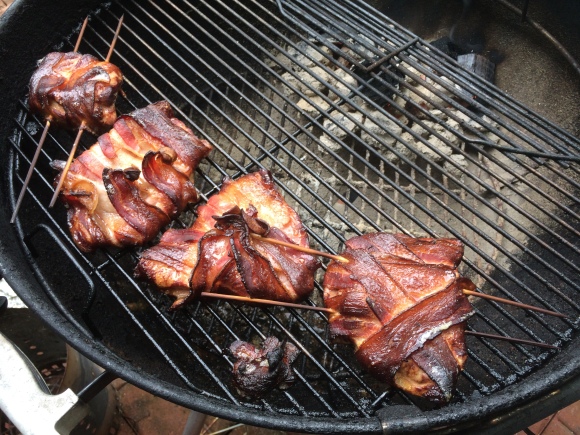 I love how bacon will curl and harden after smoking. The temptation to pull of those crispy curls is strong. 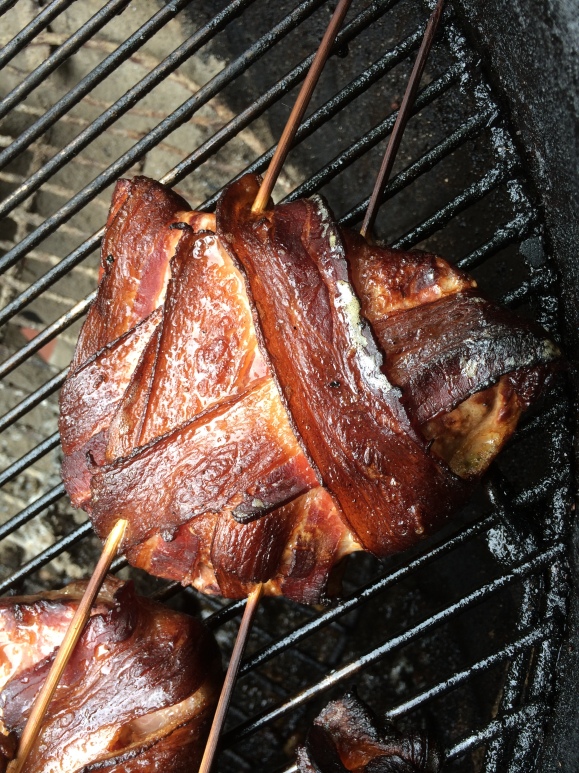 Close up of porky goodness

Once flipped, I left them alone for a little more smoke and tossed a couple more wood chunks on the coals.

The underside of the half-completed pork steaks 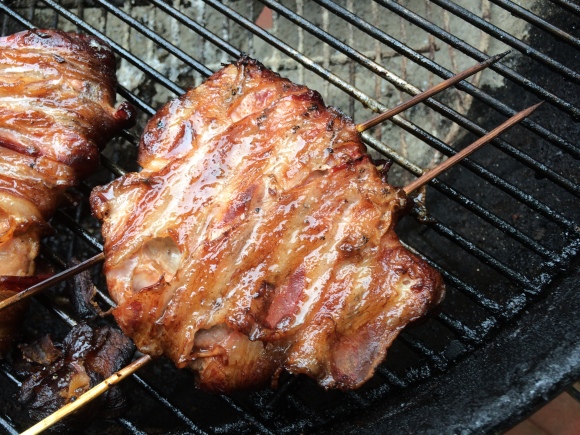 After another 15-20 minutes, I pulled the meat and let it rest for about 5-10 minutes. I’d hate to cut into one of these and have all the juices spill out.

For once I managed to get some great color on bacon-wrapped meat. It’s been a struggle in the past, but these pork steaks possessed a wonderful pink ring along the outside.

Tender, juicy… lots of pork flavors and crispy bacon texture. These are not your classic St. Louis pork steaks. No Maull’s, no beer bath, no shredding over tender dried out pork.

I repeated this on a larger scale on a UDS a week later. 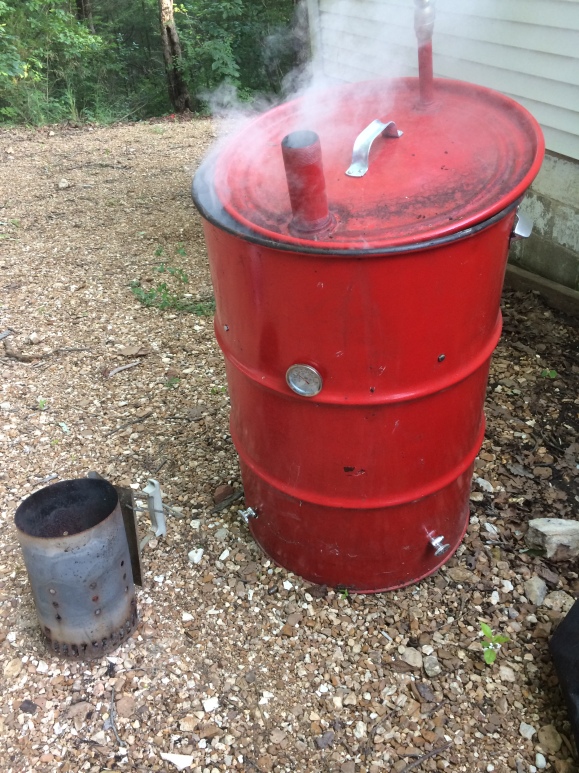 These came out just as well as the trial versions I made at home. 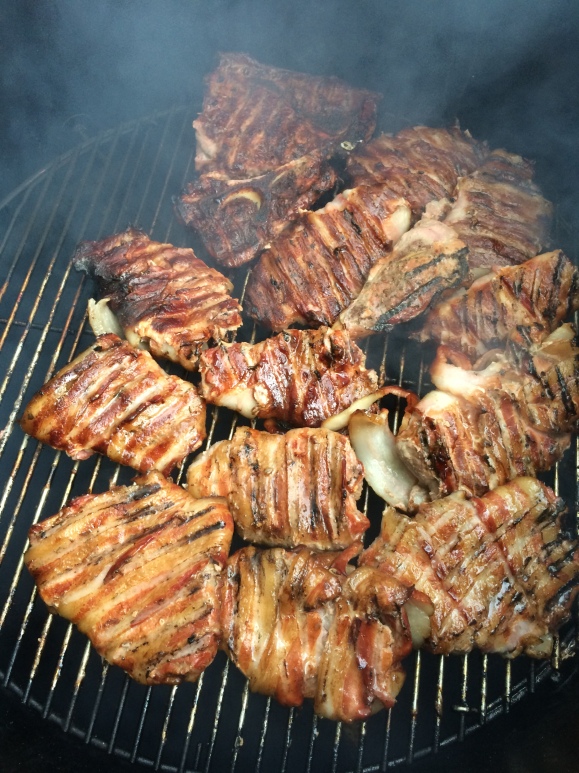 Classic childhood food experiences have a place. In the case of bad pork steaks, that place is firmly in the past. Slow smoking pork steaks is the way to go.