What better way to celebrate than with a lawyer buddy over some BBQ, followed by some beer. My long-overdue trip to Bogart’s Smokehouse in Soulard finally happened. 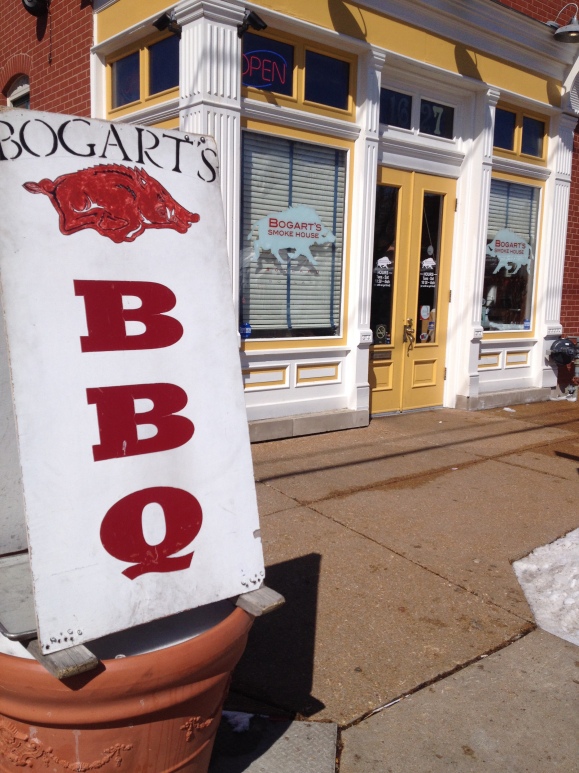 Line not out the door yet?

Every time I’ve been by this place, the line has been out the door. Usually it’s midday on a weekend to visit the adjacent Soulard Farmers Market, but on this chilly late STL morning, the line was only about 15-20 people deep.

This place doesn’t need hype from me. Since it opened about three years ago, it’s become regarded my many as the best BBQ in St. Louis. Friends who know I am trying to review all STL BBQ places worth reviewing cannot believe I haven’t yet been to Bogart’s.

Bogarts sits in a typical Soulard corner store with a narrow, colorful, welcoming facade. Like its restaurant cousin, Adam’s Smokehouse, seating is at a premium at Bogart’s.  Apparently burnt ends are a premium, too… at 11:30 in the morning! 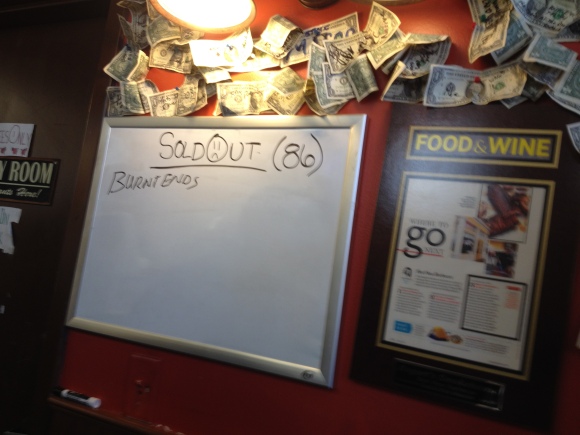 Prices are reasonable for premium BBQ. I like to go with two meat combos so I can maximize my meat sampling. 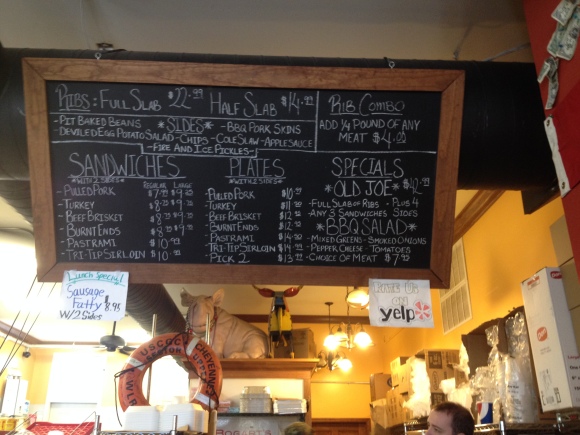 This is seriously the most difficult part of my day

For my Pick 2, I of course went with the brisket and paired it with more beef – tri-tip sirloin, and selected pit beans and cole slaw as my sides, all with an iced tea.

Pardon the blurriness of this photo, but we were packed into seats like sardines. I’m literally elbow-to-elbow with both of my neighbors.

Lunch buddy Pete, who picked up the tab with the promise that he’d turn in the receipt for reimbursement from Mr. Huge STL Law Firm, also went the Pick 2 route, but got tri-tip and pork ribs, and opted for potato salad over slaw.

Everyone gets a packet of Heinz Horseradish Sauce. Why? There’s four BBQ sauces on the table, and the meat is amazing as a stand alone product. Why take mayo w/ horseradish puree made in a metal vat in Pennsylvania and present it as an accompaniment to handcrafted elite BBQ? Maybe it was put there ironically…

Finally some expertly-made brisket that’s actually BBQ-style brisket (and not the stuff they slung me at Wild Smoke House).

What can I say but that this was expertly tender and just generally perfect. Exact balance of smoke and spice, amazing color and smoke ring, nice little ribbon of fat, generous portion for a 1/2 serving, reasonably restrained hand at the seasoning. Try this and attempt to appreciate the heightened skill and years of experience that went into making this food.

Bottom line is this is the best brisket in town (that I’ve tried to date, taking into consideration that day-to-day meat sampling may vary, and I haven’t been everywhere yet,  etc.).

The tri-tip was also amazingly epic. I haven’t seen many places serve up BBQ tri-tip, which I’ve only managed to make very, very poorly. Adam’s Smokehouse makes an impressive tri-tip, but Bogart’s is elite. The two are 1 and 1A.

Bogart’s tri-tip was thinly sliced and loaded with ribbons and marbles of fat, nicely pink internally. It cut smoothly and each bite was velvety, buttery. Just a spectacular job on this meat. I need to reinvest myself in making this.

Pit beans were among the best beans I’ve ever had. Sensing a theme here? They were rich and thick, with a hearty spice finish. I got a few nice hunks of brisket as well as lots of little brisket shreds. You can taste the BBQ drippins in these beans. Manly legumes.

Cole slaw… meh. It was creamy but not too rich. I thought it was too sweet for me, but I’m a vinegary slaw fan. This is a personal preference thing, although I think there were cooked chilled apple slices in there? Maybe next time I’ll follow Pete’s lead and get the deviled egg potato salad.

Good Guy Pete passed me a rib. What are friends for?! 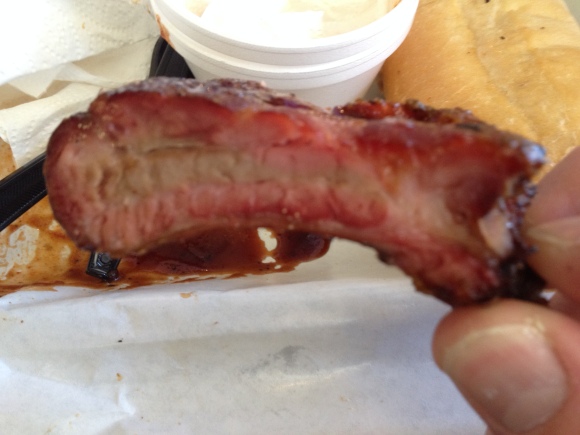 I was full… until he handed me one of these

Perfect tenderness and bite. Excellent flavor, smoke, finishing crust & seasoning. Maybe I’ll just get these next time and really indulge myself. But this was one amazing pork rib.

A truly successful Mardi Gras lunch. How best to finish this gluttonous holiday? Maybe a lead-footed friend who wanted to pay some legal fees?

Urban Chestnut, Rogue, and PBR? I hope this guy keeps speeding all over Rock Hill! I drank a bunch of fees and fell asleep on the couch, which is why I’m posting this on Ash Wednesday and not Fat Tuesday. (And, no, I’m not giving beer or BBQ or anything for Lent.)