When the STL Post-Dispatch published a list of the 5 new BBQ joints that need visiting, I treated that as a checklist. I’ve selflessly hit up and reviewed Hendrick’s and took an off-the-list detour to PM BBQ. The third BBQ Joint on my agenda is Sugarfire Smokehouse. 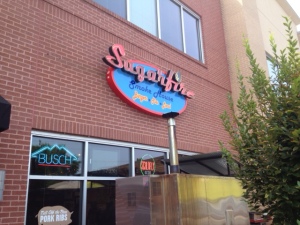 Apparently this place is owned by the same people who own Cyrano’s, the site (when on Big Bend near Clayton) of many many high school dates and more recently the site (now in Webster Groves) of many many after hours drinks with my wife.

I’ve come by here with my father a couple times to see a line out the door and nowhere to park, so we would just go across the street to Chevy’s. Not today! I’ve brought with me two very discerning and distinct palates: Mike, a zealot for Texas BBQ who has been unimpressed with STL BBQ to date, and Randy, a Reform Jewish guy who keeps fairly kosher.

We got to the front door and didn’t move much further. The sign says 15 minute wait from here.

iPhone in hand, I followed the Sugarfire Twitter accounts… 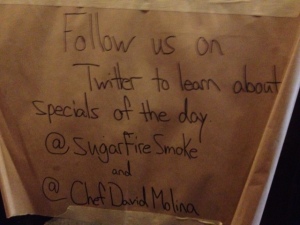 On the way to our cafeteria-style BBQ line, I noticed the soda fountain is stocked only with Excel Bottling beverages, including the southern Illinois treat Ski.

Made with pure can sugar

I’m an unsweetened tea man, myself, so I passed on this pure cane sugar goodness. Apparently Ski and bourbon is a specialty drink in SW IL. 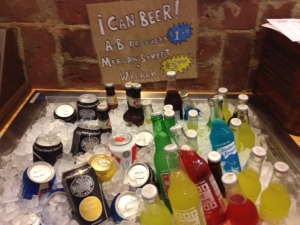 More frosty beverages… too bad this is a business-y lunch

Maybe it’s all the time I spent there in law school instead of studying (hence my shitty grades), but Morgan Street Brewery has a special place in my heart. And now they can beer. YES.

On to the cafeteria line of meaty godliness.

I realize now that these photos add nothing to this blog post. Oh well. It’s cafeteria style. You get your drinks, then walk up and tell the guy what meat you want, then the next guy your sides. Pretty simple. Pickled peppers, pickles, onions, etc. is waiting at the end of the line. Sauce on the table.

Hey, they serve cans of Stag?! More win from this place. Everyone’s grandpa or great grandpa drank Stag, but no one you know drinks it today. I’ve bought it for a fishing trip, but that’s about it.

On to the actual food. 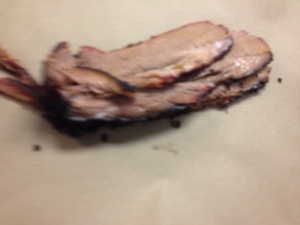 What is this a picture of, exactly?

This primo blurtastic picture of brisket was intended to reveal that the fat cap is left on the beef while smoked and cooked, and you would see a nice modest smoke ring. My kosher friend LOVED the brisket, and he’s been raised on Kohn’s brisket. He added the only non-cheezy non-pork sides of fries and green beans. He was quite satisfied.

My other dining companion got something called the Big Muddy:

This testament to gluttony comprised smoked brisket and sausage piled high on a bun with slaw and sauce. He added some fried artichokes as an appetizer. As a Texas resident for 10+ years, he said that Sugarfire was finally a BBQ place worthy of his admiration, and he said is was far better than Hendricks. Woah… that’s quite the assessment. He phoned his wife soon thereafter to plan a family trip back to Sugarfire, and he lives in Wildwood! 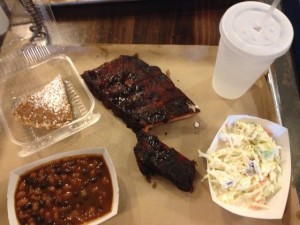 The 1/2 slab comes with two sides and a fountain drink for $14. I decided to spring for the crack pie (we’ll get to that later) for a whopping $5. Better be worth it. 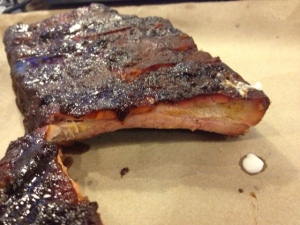 Ribs: These are fairly lean-looking for babyback ribs, but looks can be deceiving. They are just as succulent as baby backs are supposed to be. As hoped, they are tender but with a nice bite. I’d say slightly less tender than Hendrick’s (having just eaten there last week, I can say that with some certainty), but they come cleanly off the bone as eaten. You get the nice bite mark and pull when you gnash into a good hunk of rib meat.

In order, I pick up salt then pepper then sugar. There is a deep smoke ring, much further into the meat cross-section than other places I’ve tried recently. That adds to the very rich smoky flavor.

Literally, these are finger-licking ribs. There’s a sticky but not moist rub on the exterior of the ribs. It’s fairly salty but has a nice spicy finish and really adds a nice unique profile to the meat. It’s a bold move for sure – you are adding intense flavors to smoked meat that took lots of time and energy and skill to produce, but it works well. Watch out beard and mustache owners (like me). This will hang around your facial hair.

Beans: Mild spice, good tenderness. Great rich sauce with a good pepper flavor instead of pepper heat. They were restrained on the onion. I didn’t see any pork bits, so these are stand alone beans worthy of another order in the future.

Slaw: Very rich sauce but not thick. Good creaminess, but there’s nothing distinct about it besides the richness of the sauce and the crispiness of the veggies. No salt or pepper or celery seed, at least not in appreciable levels. Still quite delicious, but not wildly distinctive. A good accompaniment to the ribs.

Sauce: Didn’t even touch it. The labels said Coffee, Black Cherry, TX47 (wtf?), and other notations, but these ribs needed zero sauce. That would have been an abomination to put sauce on them. Solid ribs.

Crack Pie: Though Tyrone Biggums might have been disappointed with what he got after placing his order, but he would have liked this pie. Imagine a gooey butter pie made with molasses and a thick crumbly crust. I found it to be a little too sweet for me, and not worth the $5, but it was still pretty doggone good. The Texas BBQ lover messily devoured his with zeal.

This was a very successful business lunch. I’m going to deduct my bill, and I finally managed to sample this BBQ. Absolutely worth a return trip, and the ribs were outstanding. I’d venture to say that these might be the best ribs in town, but I need to return to Pappy’s soon to confirm. I strongly recommend you get to Sugarfire Smokehouse.