What surprise awaited me at my in-laws’ in their garage fridge but an intriguing Big Beer that some careless brother-in-law had left behind. Behold the 4 Hands Chocolate Milk Stout.

As a lover of chocolate milk and beer I didn’t pay for, what was there to lose? Time to crack this bossie and pour. 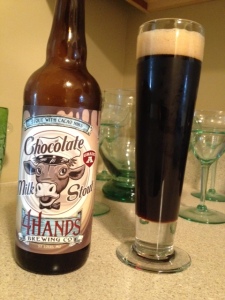 The smell of the beer in the bottle is pure stout without much of a hint of chocolate. When poured into the rising body of the beer, I was met with a thick lustrous head. As the beer breathed, the head settled into a thicker-than-Guiness landscape of froth.

Looking at the beer, it’s 100% non-translucent. The rich dark color shows it’s brownness only at the edges of the curvature of the bottom of the beer glass. The aroma once poured has traveled from stout to chocolatey stout.

Drinking this beer, it’s kind of luxurious. There’s a definite chocolate finish, but it’s purely dark chocolate with zero sweetness. Rather than competing with it, the chocolate flavors complement the strong toasted malt stout flavors.

Texturally, I’m really wowed. There’s almost a true milky sensation of the beer rolling around in the back of my mouth, though it’s definitely a beer. At a mere 5.5%, I could easily handle the Big Beer. 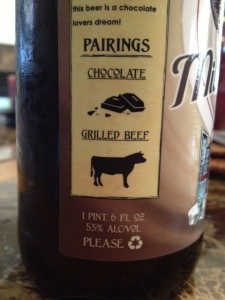 Unfortunately the beer doesn’t suggest pairing with ice cream, except perhaps chocolate ice cream? Could this be the perfect ice cream float beer? (Unfortunately my in-laws had no ice cream but for some rainbow sherbert… that would have been disgusting.) I was between meals, so no beef either.

How about pairing it with a Cardinals shellacking of the Brewers? 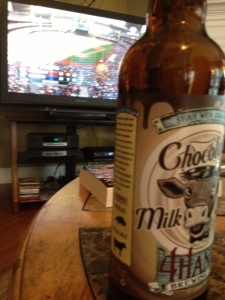 My applause to the people at 4 Hands. They know what they’re doing in dessert beers for sure. I’m always looking for more local beers, and 4 Hands is on my radar going forward. My recommendation for this decadent dessert of a brew: Drink This Beer