A kid’s birthday party in Chesterfield left me with a couple hours to kill. On the way, I noticed  BBQ restaurant: PM BBQ. Instead of watching my child and others bounce around and eat pizza, I decided to give this place a shot. It’s not he’ll be unsupervised, so I can have some fun, too.

At the corner of Edison & Long in the Gumbo Flats flood plain, the crisp new facade of PM BBQ greets you. 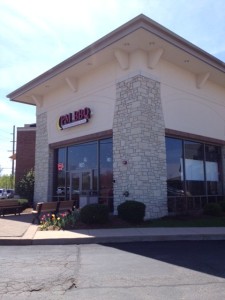 So new and clean… is this place legit?

Even though the place shows no sign of smoke or grime, they have some hardware to boost credibility. 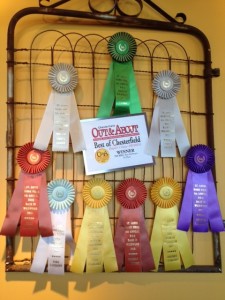 When your ribbons number such that they cover all the colors of the rainbow, you might be doing it right

Let’s talk briefly about prejudice. One of my preconceptions of high-end BBQ restaurants includes old buildings, usually either (1) extremely old & original location, or (2) very old building that’s been reclaimed. Examples of the former are Fiorella’s Jack Stack in Martin City, MO, Rendezvous in Memphis, or Arthur Bryant’s in Kansas City. Examples of the latter include (previously-reviewed) Hendrick’s in St. Charles, MO or Pappy’s in St. Louis, MO. Each building has character and charm, and none is in a shiny new building.

Well, as history has shown, not all prejudices hold true. PM BBQ is in a nice new building, and it turns out their BBQ is pretty damn good.

Having never been there before, I sought counsel from the kid at the counter. He advised that brisket sandwich is one of the best things on the menu for first time customers. Additionally, I went with beans as a side, since that’s a decent measure of BBQ prowess, and fries because I was in the mood for some french fries.

That’s an impressive portion of meat, which is a good thing because I’m hungry and I love brisket.

Before I came to PM BBQ, I phoned a friend who works in Chesterfield for some input. He didn’t answer, but called me back after lunch. The report was that PM BBQ is the best restaurant in the Valley by far, and brisket is the way to go. I have to agree with his assessment.

Behold the care taken in preparing this cow

The brisket is thin sliced, certainly thinner than I can cut mine without a rotary meat slicer. As you can see from the photo, there’s a nice dark pink smoke line and plenty of peppery spices on it. Extremely tender, very very moist. I’m a little bit blown away by this brisket, and I don’t say that lightly. This is an impressive portion of meat, from the quantity to the quality.

It’s clear to me that significant skill went into this brisket, and as an amateur constantly seeking to better my own brisket, I can really appreciate that effort and skill.

I do have one negative comment, though, and it relates to the bun. I got a dry (not stale) yellow bun that overpowers the meat and makes my bites dry, so that you need to add sauce. Adding sauce then masks the flavor and texture of the brisket, so why go to a really good BBQ place in the first place? No bread needed, so you should just discard it if you get the brisket sandwich, or take it home and feed the birds.

Speaking of sauces, there are four on the table.

Carolina, Golden Mustard, Spicy and Sweet. I’ll review each in turn from right to left.

Carolina – Nice and vinegary, as you would expect from a Carolina sauce. Unlike many sauces that call them selves Carolina, this one is legit. Commercial “Carolina” sauces are more regionally-inspired than the genuine article. It’s very thin and nicely spicy, without a hint of tomato. I’m a huge fan, and the yellow bun absorbed it well.

Golden Mustard – Ah, the step brother of Carolina sauce! There are truly two kinds of Carolina sauce, one being the vinegary eastern North Carolina discussed above, and the South Carolina mustard. This is the latter, and it’s powerful. I don’t have much experience with this type of BBQ accompaniment, but PM’s has a distinct flavor that shows inspiration from or relation to the Asian mustard you get in little packets with your General Tso’s chicken. I liked the consistent texture and solid heat profile, but this was not my favorite. That’s more of a testament to the strength of the others and my virginity to this kind of sauce than an indictment on the PM BBQ Golden Mustard sauce. Perhaps a resident of the Palmetto State would be beside himself with pleasure at this sauce.

Spicy – Good, but not spicy. I was waiting for spicy… Perhaps this town has a bastardized BBQ sauce palate because of all the watered down flavorless goop that passes for pork steak sauce. If you drink nothing but Bud Light all the time, then a Schlafly tastes like a malty porter. If you only put skim milk on your raisin bran, then whole tastes like heavy whipping cream. And if you only dunk your meat in a slurry of Maull’s and beer, then normal sauce with a modicum of zest is “spicy”. I know spicy, and this isn’t it. (And, yes, I did swirl the bottle a few times to arouse any sediment and get a consistent sauce pour.)

Sweet – We have a winnah! Excellent sauce, great spice flavors without a very sugary pop. Perfect sauce to put on the brisket, and I used it to clean up my french fries. Wonderful sauce.

I’d be remiss if I didn’t tout the beans, which were wonderful. I counted three kinds of beans, and a few nice big chunks of pork with some short ribbons of onion. The beans came out very hot and had a nice twinge of spice, coupled nicely with a very subtle sweetness. The tenderness was spot on, and I enjoyed the thickness of the sauce. I took a bite to sample, then destroyed half of my serving before getting to the brisket.

The french fries were french fries. Thicker than shoestring, they came out piping hot. What can I say… I was just in the mood for some fries. I’m told after the fact that I should have gotten the Sweet Corn Spoonbread. Live and learn. I did find that my fries were oversalted, but it’s hard to complain when the rest of the meal rocked as it did.

With my meal, I knocked back some iced tea. They do have bottled beer in the soda cooler, but it was barely noon…

PM BBQ turned out to be an amazing restaurant with intense credibility based on the strength of the brisket. I’m definitely returning, and not just when I find myself way the hell out in west Chesterfield.

It only took 40 minutes to eat. That gave me tons of time to kill after lunch. I got in my car and looked at the storefront before me. Whaddaya know! The Chesterfield International Tap House is next door to PM BBQ. I think I know how to kill some time.

How many beers do they have on tap? A few…

I was thirsty and not in the mood to think, so I ordered a known favorite: Charleville Half Wit Wheat. 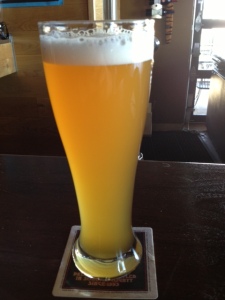 That beer was so good, I went with the bartender’s suggestion of Charleville Nitro ESB. 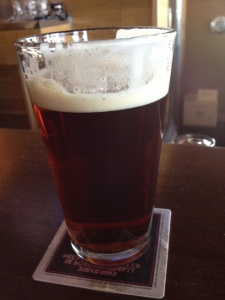 All this beer eventually sent me to the restroom, where I saw this on the stall partition:

A fitting end to my Chesterfield adventure, among the hundreds of beer and restaurant stickers that plastered the walls. I’ll be back to iTap soon, if not this location then another.