Moo Moo on the BBQ

Bluebell the Cow… remember her? 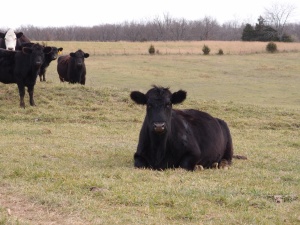 Bluebell was kind enough in her passing to leave me a special cut of beef called the Brisket. Thanks! Brisket is merely one of many delicious Hunks O’ Cow

Besides the two rib steaks we tried on a cedar planked fish night, the brisket is my first real beef treat from Bluebell. It’s a favorite of mine, and I’m super excited to sample some local grass fed beef.

Bluebell beginning her journey to my tummy

I started the brisket not with my usual mustard-based paste, but with something a little milder that will let me taste the grassiness and richness of the beef. The rub was simple: brown sugar, garlic salt, italian seasonings, seasoned salt, cayenne pepper, and paprika.

The brisket began fat side down to try and drip off a few extra fatty bits, though the rural butcher did a really good job of trimming the fat. If I wanted, to baste it instead, perhaps the fat would begin on the upside.

After four-ish hours of smoking indirectly in the Weber 22″ kettle with a bunch of cherry wood chunks, the brisket was ready for its foil wrap.

My son actually wants the family to open a BBQ restaurant, and for us to call it Moo Moo on the BBQ. That’s certainly not happening, but he gave me a clever title. The simple wonders of the mind of a 6 year old.

Foil, do your magic

Within the foil, all over the brisket, is some mild Kansas City style BBQ sauce and a little dash of PBR for steaming and tenderizing. It needed about three more hours, with some 180 degree rotations for good measure, and a probe thermometer inserted.

Though the meat was technically “done” a couple hours into the smoking when it reached 150-ish, the foil wrap brought the meat to a steady 190-ish for the final hour or so.

For good measure, since I am making big brisket sandwiches, I smoked a pound of bacon.

Bacon finished, I prepared to assemble my brisket sandwiches. I have some whole wheat buns, provolone cheese, pickles, the aforementioned bacon, and some spicy BBQ sauce I bought from Ace Hardware that morning when I had to buy a toilet auger (don’t ask; total child-related nightmare).

First, the brisket had to rest for at least ten minutes. The muscle had to relax, and all the excited beef juices needed to remain in the tissue when I cut the meat, instead of spilling all over the cutting board.

I’ll state with a little hubris that I am getting pretty good at making brisket on the grill, and this might be my best one yet. Yes, you could credit the cow and/or cattle farmer. And, yes, this would probably pale in comparison to some actual competitive and/or professional brisket, but give me this little victory.

It was delicious, for the record. Thanks, Bluebell (and mom, for the XMas gift)!

4 thoughts on “Moo Moo on the BBQ”