Lagunitas makes good beer, as I’ve discussed twice before. Today I sample yet another of their creations: Brown Shugga’.

A college friend on Facebook mentioned that he was “thankful” for Lagunitas Brown Shugga’, which checks in at a whopping 9.9% ABV. I’m excited to pair this with some Thursday Night Football,

Quick Aside: This friend is competent in few things, though I tend to trust his taste in beer. Like me, he has the portly physique of a beer-drinking pork lover. As a Kansas resident and KU fan, his taste is inherently questionable. “Wait,” you’re undoubtedly thinking, “KU fans have both the palate and cognitive capacity of fruit flies.” Yes, you would be right most of the time; Many do have a brain stem resembling a drought-stricken string bean. However, despite being mired in a rectangular wheat plot commonly known for bigoted “churches”, the curious absence of evolution, a 6,000 year old planet, the most obnoxious college sports fans in the world, an inferiority complex, and the Wizard of Oz, some people there have grown (dare I say… evolved?!) to appreciate fine craft beers. My dear, dear friend is one of them.

As we prepared to sail off into the sunset together…

Thank you, Bryan, my precious darling, for this recommendation. (He’s the short guy in the absurd camo shirt with the awful facial hair and very heterosexual thingy in his right ear.)

Back to the beer…

I still went by to get some other beers and wound up putting my name in a drawing to win a Magic Hat electric guitar of all things. Next to the entry box, completely by chance, I saw a display case of Brown Shugga’. Sadly it was at room temperature so I had to tide myself over with Trout Slayer Ale whilst the Lagunitas chilled. Would it be worth the wait? 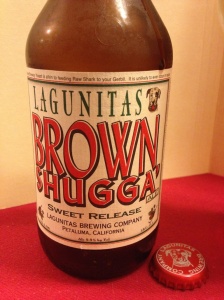 Lots of talk leading to this moment. Will it deliver?

The inhales you take after your sip, while you roll the flavors around your tongue, definitely give the high alcohol hints. Sugary and hoppy/bitter at once. Almost no malt or grain flavor at all, though the sweetness is much more of a hint than a star. Hops, which control the palate here, are very lightly floral and fruity. It’s a unique sweet / bitter that I’m not used to, though the sweetness is almost subtle. I found that inhaling deeply as I sipped provided a very enriching flavor. 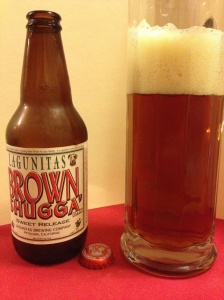 What a wonderful creation!

As to the color, it’s a wonderfully rich brown color. Not a brown ale, mind you, but that of a proper English strong ale. I really find the color, head, mild effervescence all very appealing and inviting.

The story apparently goes that this seasonal beer wasn’t made in 2011 due to some capacity or other issues, and the true Lagunitas lovers have waited an extra 12 months to get another taste. In my opinion, it’s worth the wait. I’m quite impressed by this beer, though more than two in a short period of time (especially after a couple other beers) would have most people on their ass.

If you find yourself looking for something unique with a kick and high ABV, then get yourself some Brown Shugga’. Definitely Drink This Beer.