You need to download the Weber Grills app. I was gifted some organic corn-fed beef short ribs by my most excellent rural uncle and aunt, and I turned to the Weber app for guidance. Braise, smoke, and grill said the app. Sure thing.

Not For Sale? Approved for consumption, though.

I went down to the backyard veggie garden in search of some home-grown spice and tracked down some jalapenos and other miscellaneous peppers. 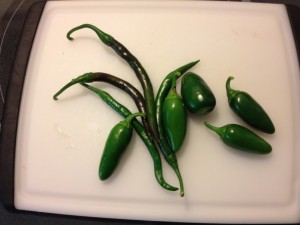 I chopped up the jalapenos (and washed off the seeds), then tossed it in a braising liquid consisting of red wine, Miller High Life, sage, rosemary, basil, Lawry’s seasoned salt, sea salt, and a little vegetable oil. That all went in a pot on the Weber 22″ grill over semi-direct heat. In went the meat.

Braising is not really parboiling, is it?

After about 15 minutes, I flipped the short ribs in the pot and gave them another 15 minutes or so.

While at my local Ace Hardware, I came across a couple goodies!

Jack Stack is my favorite KC-area BBQ restaurant, bar none, and I had four years to try them all. They make something called the Martin City Mayor sandwich… holy hell. If you ever want to wow someone, though, get the burnt ends and a tower of onion rings. Atheists will see Jesus.

Anywho, after some braising, I let the short ribs smoke indirectly with the Ozark Sugar Maple wood (having been soaked in water for an hour or so, of course).

Every 10-15 minutes or so, I would re-braise the meat in the sauce. Many dunks were needed.

Now would be a good time for a beer. How about this one? 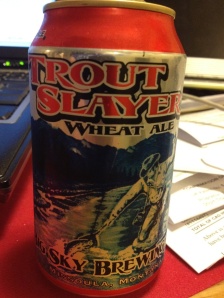 Wow, this is an awesome beer. Not quite the best canned beer I’ve ever had, but damned close. And it’s a Whale, from Montana no less!

Back to the BBQ… I gave each short rib segment a hearty coating of the Jack Stack sauce, and then returned it to the indirect heat. A total of 30-4o minutes indirect heat will more than finish the short ribs.

Yes, some other meat snuck onto the grill.

So maybe some pork burgers and a huge corn-fed beef steak made it onto the grill as well. That steak was EPIC, by the way. (Also part of the uncle / aunt frozen meat gift set.)

The verdict on the beef short ribs… fatty as all hell. The parts of the meat that we managed to pull were very tender and flavorful, but there was so much fat, both marbleized and in chunks, that it was hard to navigate. I was impressed with the meat itself, but my kids were hacking around fat while eating the meat.

This cooking method may work for some kosher lamb ribs (foreshadowing) or other meat. I just may not sink cash into beef short ribs anytime soon, particularly when so many other cuts provide leaner, more tender meat on the BBQ. Still, what I ate was delicious and I was super-grateful for free meat.

One thought on “BBQ Braised and Smoked Beef Short Ribs”