When I told my two older kids (ages 6 and 4) that I was going to make chicken on the BBQ by sticking a PBR up a chicken’s butt, they thought one of two things: “Dad is lying” or “That is awesome”. Either way, they were super-psyched to see me finally put one of my BBQ-themed Fathers’ Day gifts to good use.

Such a simple design

I cracked open one of my Schlafly Pumpkin Ales to help me along. It’s like drinking a pumpkin pie, if the baker had a very heavy hand with the pumpkin pie spice and he also made it high alcohol. Yet another fancy sippin’ beer from Schlafly.

Don’t mind this. This is doctor’s orders.

And then promptly onto the BBQ pit over semi-direct heat, breast side to the coals.

Chicken and corn… simple yet satisfying

After 30 minutes, I had charred the hell out of the breast skin. No matter, since I don’t eat the skin. Perhaps a more controlled burn next time. I rotated 180 degrees and continued. 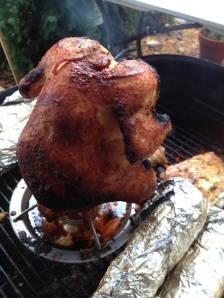 Why let a healthy corn and chicken meal go unchecked? I made up some Brussels sprouts on the stove top… quartered and sauteed with a pound of chopped bacon, half stick of butter, and half a diced onion of course. It cooks in less than an hour and makes an amazing side dish. 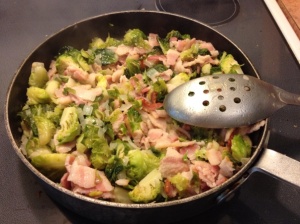 Finally, the chicken was ready to come off the grill for service after about an hour and 15 minutes or so, having been verified with a few thermometer readings in the breast meat.

This is as simple as it gets. You don’t really even need a chicken can rack. You can just jam the can up there and make a tripod with the chicken legs and the can, but I prefer the stability.

What a wonderful dinner, another hit with the kids. It was super moist throughout, and the meat was tender and flavorful. Hopefully they don’t think sticking beer cans up butts is acceptable in any other animal application.

Speaking of other animals, I’m sorry to report that Samantha moved on to Doggie Heaven in mid-June, way ahead of her time. It was a very sad time for us, something I didn’t really feel like mourning publicly when it happened. She could no longer negotiate steps, puked after she ate, couldn’t squat to pee, etc. and was just miserable. She was the only dog I ever had and the best dog I’ve ever known.

It took two months, but the kids finally broke my resolve and we picked another puppy up from the pound. Meet the newest Simpson, Buddy the Dog.

Buddy isn’t just doing a Jeffrey Leonard impression for the photo. He really does always have one ear perked up and the other folded down. One Labrador ear and one Shepherd ear… perfect for a mutt born to a stray mom who we found at the Humane Society. We are trying to hold off on people food (as in BBQ scraps) for as long as possible. The kids seem to have taken a shine to him, though. 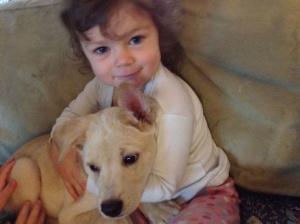 Someone loves their new puppy

2 thoughts on “Beer Can Chicken”