As I have mentioned before, I am in the parish men’s club. That comes with certain responsibilities, including working zealously at the annual fish fry and eating food / crushing AB-InBev products at our monthly meeting.

One of those responsibilities was presented to me a few weeks ago: “We need you to cook dinner at the June meeting. It’s the same night as the washers tournament, so plan on 50 guys.”

What’s fairly simple that has wide appeal, especially to a beer-swilling crowd of old men from St. Louis? Pork shoulder, of course.

I have never cooked for more than a dozen adults and as many kids at a family function, but this is a little more intense. I made an epic trip to Sam’s Club. A learned BBQer that I know through a friend told me to make one pound of raw pork meat per person, so I went ahead and bought eight shoulders that came in at about 55 lbs.

My bounty from Sam’s Club

As you can see, I also bought a ton of other stuff, like beans, corn, beer (for me), wood, charcoal, buns, seasoning, cole slaw, etc. At any place but Sam’s, the jackass cashier would ask about your weekend plans and then semi-jokingly invite themselves.

I got to the school parking lot around 10:30am with plans to serve dinner at 6:00pm. Most unfortunately, I came across a couple septuagenarian dudes grilling burgers for some octogenarian ladies having a luncheon in the cafeteria. The grill was full (FULL!) of charcoal and the thermometer said 500 degrees. This is a problem.

After evicting those guys and cleaning out the grill, I was ready to go at noon. I set up the fire box on the side of the smoker with a huge amount of water-soaked hickory wood chunks on top of the coals.

Hickory wood ready to do its magic

We bought this grill to replace the rusted-out shitbox of a grill that we had been using for years. It was a custom rig from some shop in Memphis and cost a pretty penny. 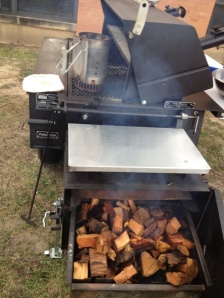 Behold the wonders of modern BBQ

As the smoke began to fill the chamber, I got my rub ready to go. Again, having never done this before, I made way too much rub.

I needed enough for eight shoulders, so I poured in 2lbs of brown sugar, a full container of paprika, a half container of seasoned salt, and a bunch of garlic pepper.

Too much pork rub

I made about 40% too much, which is a damned waste. But, having rolled a bunch of raw pork in it, the remainder had to be tossed.

The shoulders were arranged fat side up on the grill with the smoker in full force, and then I sprinkled on a little more rub for good measure. 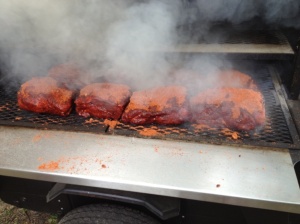 I figured I would rotate everything around at about the 1.5 hour mark.

A profile photo of the raw pork

After an hour and a half, I reloaded the fire box with more wet wood and did a little ballet of moving the meat around so as to evenly cook it all.

I shuffled the meat around a couple more times to get things cooked up evenly.

I decided to BBQ up 2 lbs of maple bacon to chop into the baked beans. You really can’t have enough pork at this BBQ.

The shoulder looks amazing and is coming along nicely, evidenced by the bubbly fat cracking through the plaster walls of the charred sugary rub.

After around four hours of cooking, each shoulder was wrapped. I made an X out of heavy duty aluminum foil and put the pork in the center. I made a boat around the meat, then poured in half of a PBR and maybe 3-4 oz. of BBQ sauce, along with a little seasoned salt and garlic pepper. Each was crimped and put back on the grill to finish.

The beans needed more than the original 1 lb of bacon, so a second pound cooks above. Some canned corn has joined the party! I also bought a cookie tray.

Finally, after about 7 hours total on the BBQ, I was ready to shred / chop the shoulder into some pans. All of the luxurious beer / seasoning / fat drippings went right into the meat.

Chopped pork. Ready for your belly.

I served it all up on a long folding table and the metal tray behind the grill.

So maybe I grossly over-calculated two things: (1) how many people would show up, and (2) how much meat each person would eat. After everyone had eaten their fill and more, I still had two unshredded shoulders and some more meat in the pan. I pawned off as much leftovers as I could on people, who were all to willing to fill up to-go containers with the good stuff. It made a great lunch and dinner for me today.

It was universally well-received, even by the two hardcore BBQers in the men’s club. They were either bullshitting me to protect my feelings or were genuinely impressed, and frankly either one of those is fine by me. The rest of the men’s club, full of beer-chugging washers players in 90+ degree heat, were all thrilled with the dinner. I enjoyed a smug sense of self-satisfaction, despite the fact that I lost both washers games and then crapped out at poker that night.