Wikipedia (and we all know how super-accurate that is) has a lengthy history on the Tri-Tip cut. It comes from the bottom sirloin part of Bossie, and is usually cut into steaks or ground into hamburgers.

The guy next to us at the recent World Pork Steak Championships made some Tri-Tip and shared it with us, prompting my interest. Plenty of people have blogged tips about it, the sum of which seems to be the K.I.S.S. Rule: Keep It Simple, Stupid. Flip once, never puncture with a fork, don’t stuff it with things, don’t get cute with seasonings, no marinade, etc.

I set up the Weber 22″ kettle for semi-indirect cooking with a 2/3 coal chimney’s worth of charcoal, as well as some water-soaked pecan wood chips for a little extra flavor.

As that started to smoke, I seasoned the beef with nothing but coarse black pepper and Lawry’s seasoned salt. 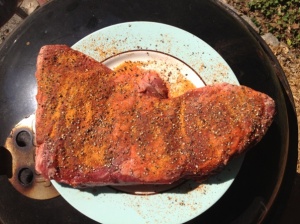 Tri-Tip, ready for the grill

This particular cut is 2.5 lbs, the largest I could get at Schnucks, so I anticipate a decent amount of cook time. The various BBQ bloggers who have written about this, some claiming to have made this hundreds of times, claim that it takes about 45 minutes on average at semi-direct heat.

It went on the grill, fattier side up, though they did a good job of trimming the meat. We will have baked potatoes and some bratwurst alongside the Tri-Tip.

A super-healthy dinner awaits me

Now would be a good time for a beer. How about some Denver Pale Ale? 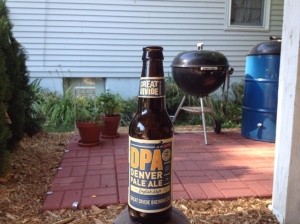 Strong hoppy finish, light fruity aroma… do I pick up on some malted hops? A great beer.

I built myself a little patio for the Weber and Big Blue off the side of the house last weekend, turning unsightly unusable space into something a little nicer. It’s pleasant to relax in the shade and enjoy the fruits of your labor with cold beer and the smell of cooking cow flesh. 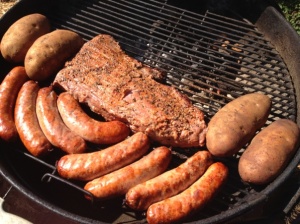 The thermometer says it is only at about 115-120 degrees, so it’s on pace to finish at about an hour. I flipped it and moved it closer to the center of the grill. As the Tri-Tip has cooked, it has bulged in the center and gotten a little narrower.

Finally, after about an hour, the thermometer reads just over 145 degrees.We served it with potatoes, bratwurst, peas, baked beans, and garlic cheese bread. Like I said before: healthy meal.

Plenty of (fatty) protein and starch to go around

My wife and kids are a little intolerant of medium-rare meat, so they can have the edges that are more medium-well, while I take the pink and medium center. 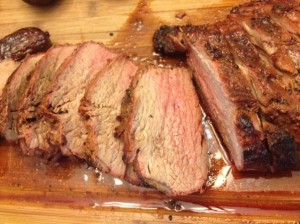 Beef and beer… go well together

You are supposed to carve against the grain, and I think I am a little off of perpendicular. Still, I let it rest for five minutes and sliced hearty pieces off.

I thought it was delicious. With the minimal seasoning, the beef is the star. You don’t have many ribbons of fat because it’s so finely marbleized. No wonder this makes such great hamburger.

Tri-Tip is simple to make, cooks relatively quickly, is fairly affordable (about $6.xx / lb, well-trimmed), and has wide appeal, or at least it did at our table. Next time perhaps we will slice it up a little finer and put it in some fajitas – we had more success with this than with the flank steak we have made on the grill for fajitas.

NB: BBQ potatoes + pecan smoke = major chocolatey flavors on the potato skin. Don’t know why, but it was really surprising and delicious.