I am a member of the Our Lady of Providence Parish in South St. Louis County, as evidenced by my Fish Fry post and Facebook ads pointing to the same post.

Last year, the Men’s Club had two serious problems: (1) a broken, dilapidated metal deathtrap of a BBQ pit, and (2) a budget surplus. What better way to fix both problems at once than by buying a very expensive custom BBQ trailer from a Memphis-based company? 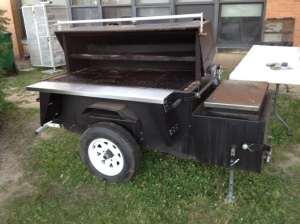 We have several BBQ fanatics in the Men’s Club, including one guy who agreed to cook us dinner at the last meeting. We meet the third Thursday of every month for a brief meeting, some dinner, and then poker/beers until (1) we run out of beer, (2) someone wins at poker, (3) the school alarm goes off, (4) any combination of those.

This evening, what’s in the box is a bunch of charcoal and cherry wood logs. They called them chunks, but these are quartered logs, like something you would put on a back yard fire pit. And, they were not wood soaked. 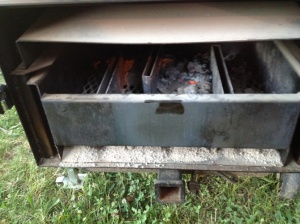 Sadly, I got there late. I thought I was early, but everyone else was way early, so I wound up being late. That put me at the end of the BBQ line.

However, where one line for food was long, another line, this for beer, was short:

The beer had already been hit hard. Half of Layer One was gone! There is a strong preference to A-B / InBev products in the Men’s Club. I had to make a PBR run when they only had Bud Light a few months ago.

On to the ribs. I consulted with the BBQer. What did he do?

The ribs were coated in a rub of Lawry’s seasoned salt, butcher’s pepper, brown sugar, garlic salt, and onion salt. Presumably after having removed the membrane, the ribs smoked for four hours with the cherry smoke. After smoking, the ribs were (individually?) wrapped in foil with a mixture of beer and Maull’s BBQ sauce for a fifth and final hour of slow cooking, moisturizing, and tenderizing.

Could these be the potatoes like Grandma Simpson used to make? Shitloads of pork grease in them? Sure looks like it.

Slaw with crushed Ramen noodles and some pine nuts in them? WTF is going on here?

But the ribs are the star here. Last one there means only one serving. They were delectable. Meat came right off the bones, but they were not too tender. I have been criticized (by this BBQ chef) for my overly-tender boiled ribs. To each their own – I love them both.

Terrible meal. I demand a refund.

As you can see, it was awesome. Great work, Paul!

NB: This brings me to an unrelated pet peeve. You’re out to eat, and Mr. Smartass Waiter comes by to a plate that looks like this. You get one of two jackass comments. (1) Did you enjoy the meal? [chuckle], or (2) Well, looks like someone really enjoyed the dinner. I’ve waited and bussed at several restaurants and never said either of those things. Any server who does should be catapulted into a volcano.