Why not spend a hot St. Louis late-May Wednesday lunch with my father, especially when he likes food and beer about as much as I do?

Not sure if including that photo will annoy him or make him laugh. Whatever.

Today we ventured into Creve Coeur, Missouri (French for broken heart, but which we all pronounce Creeve Core) to visit our local Granite City Brewery for lunch and a sampler of craft beers.

First order of business is to peruse the menu. Whoops, they have a Cuban sandwich. Obviously that’s what I order. Pops ordered a large Greek salad (healthy) and a heaping ton of onion rings (not so healthy).

It looked pretty good, though there’s more bread than stuff between the bread. 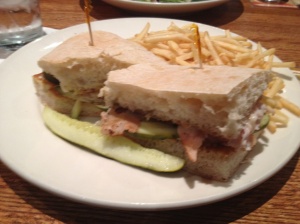 They used turkey instead of ham, and the bread was a very soft white ciabatta with too much flour on it instead of a crispier panini, sourdough, or rye bread. Decent amount of pickles, cheese, and yellow mustard. Significantly more pork was needed. It was good, but not great. In hindsight, I should have paid the buck fifty and stepped up to the waffle fries instead of the shoestring fries.

For the first time I can recall, a Cuban sandwich left me underwhelmed. Hopefully the beer is much better. 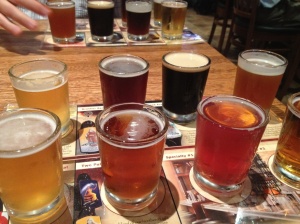 I’m sure as heck not sharing eight little beers with my dad, so we each got our own. As he drank his, he told me that he considered just heading home and finishing the day drinking that we started. Sorry, but I have to get back to the office.

Here’s my quick hits on these beers:

Northern Lights Lager – Light is right. Not much to this beer, either in terms of color, flavor, etc. It needed to be colder or the restaurant needed to be much hotter for me to want a second on this one.

Brother Benedict’s Bock – Mine was kind of flat, even for a bock. Super strong toasted malt flavor, but left quite a bit to be desired. Not something I would buy again.

Two Pull – Basically a half and half of the aforementioned Lager and Bock. All it did was water down the Bock.

Broad Axe Stout – One note stout. Milky, but not too flavorful. Nothing complex going on, like you see with other more popular stouts.  What’s going on with these beers? Augh. Has to get better.

Specialty Beer #1: Some kind of berry fruity wheat beer. Meh. Schlafly’s Raspberry Hefeweizen blows it out of the water.

Specialty Beer #2: A Belgian ale. I hesitate to say this, because it’s a horrible critique of a craft beer, but this was… kind of reminiscent of tongue-tingling medicine. Completely unattractive and I regretted taking my second swig to confirm the unpalatable nature of the first drink.

Finally, I saved what I anticipated to be the best for last. Briefly, though, let me tell you this: I planned to go to this place and lay down good money to buy a growler of beer and put it in the office fridge and then work the rest of the day with full knowledge that fresh craft beer waited for me in the communal kitchen. This has been a frustrating event to say the least.

Higher view of the beers

Wag’s Wheat – Cloudy, but really flat. I was hoping for a little effervescence here! I picked up on the citrus flavor, but it is super faint. I could sit down and drink this cold on a hot day, but it’s not much to speak of by itself in an air conditioned restaurant. I don’t like putting lemon in beer, but this beer needed a lemon. Easily the best of the lot so far, but it’s been a mediocre lot.

Duke of Wellington IPA – Please, please, please don’t let me down IPA, I implored my little two-to-three ounce serving of beer! [sips beer] Doggone it. Well, it tastes like a super-basic IPA. Minimal bitterness, minimal fruitiness, negligible flowery or fruity aromas. It comes off as a building foundation upon which a robust, complex IPA could be built, but the laborers just went on strike and I have to live in a framed-out house of a beer. Frustration!

Here are the two things you need to know about our visit to Granite City Brewery: (1) I bought no to-go beer even though I fully intended to do so before showing up, and (2) not only did my father allow the waitress to bus multiple glasses half full of non-consumed beer, but he also got no to-go beers, even though I was the one buying lunch!

Maybe it was an off day across the board for this place. I went a few months ago with some friends and their flatbread pizzas were great. I had one beer and don’t remember disliking it. Either way, I don’t expect to be laying hard cash there anytime soon, and that’s a damned shame. I bought some Shift on the way home.