Fish on a cedar plank… hard to go wrong with that. Strong flavor, moist fish, easy to make. Why mess with something that’s not broken?

For our BBQ pork steak competition, my team not only needs to come up with an appetizer paired with craft beer in addition to some epic pork steaks, but we also need to put together a winning entree paired with a(nother) craft beer. How about fish sandwiches two ways? I skinned then cut the large walleye filet into seven little square chunks, about 1.5″ squares, and positioned them on their own wood soaked cedar plank. The plan is to put these on some split and toasted King’s Hawaiian mini buns along with some provolone cheese, dill pickles, and crispy bacon to make fish sliders.

Second, I wanted some salmon on a BLT-type of sandwich. I found some vine-ripened tomatoes in late April (probably from Central or South America), swapped out arugula for the deplorable iceberg lettuce, and used the rest of the crispy bacon. My goal is to get all of this stacked up on a toasted sourdough mini-loaf from Schnuck’s and smear on a heapin’ helpin’ of Miracle Whip. Who’s on board with this?

Except… salmon isn’t my thing. It’s usually too fishy for me, even on a cedar plank. The guy at Bob’s Seafood in U. City recommended [name of fish that I forgot]. A quick plug for Bob’s, who gave me nothing in consideration for this plug: They are (1) incredibly helpful, (2) have a massive selection, vastly superior to any local grocer, (3) gave my kid a balloon for no reason other than the fact that she was with me in the seafood market, and (4) gave me some free lemons because I was going to make some fish that night. Go there. Be wowed.

I’m really annoyed that I didn’t write down the name of the fish. It is salmon-colored and apparently in the same family, but it is a little milder. It is farm raised, though I prefer wild, but whatever. Salmon cousin went on the wood soaked cedar plank skin side up (easier to scrape the skin off after a smoke), with a few slices in the skin and the free lemon sliced on top. 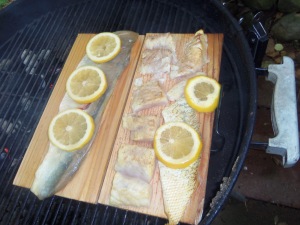 Smoking: Bad for you in cigarettes, great in fish

After about 30 minutes of indirect heat and cedar smoke, things look great and smell even better. I toasted all of the bread, sliced up the tomatoes, and chopped up some bacon and cheese. Sando time: 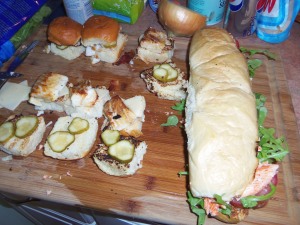 Full of good protein… plus a bunch of bacon

The sliders turned out really good, but could have been so much better. Next time I will melt the cheese on the grill, possibly with the bacon between the cheese and the fish. As good as they were, it’s rough having unmelted cheese on a slider. I frickin’ love walleye, too, so having missed an opportunity to make something epic is annoying. Plus, eat them fast. They will cool off quickly.

The   arctic char BLT, though, was amazing.

With this sandwich, you get it all: rich, flavorful, flaky, smoky fish, a hearty slice of tomato with the complement of crisp arugula, the zing of Miracle Whip, and of course the crisp crunch of some bacon, all on a fresh, toasty sourdough hoagie bun. This sandwich was devoured by the taste testers. I would do nothing different.

As for beer pairings, we were running the full gamut at the BBQ. Schlafly mixer, Dr. Funky Bunch’s Brown Ale homebrew, Boddington’s, Schlafly Summer Helles, Bud Select, Newcastle. Jeez. I guess I would pick a refreshing beer, like the Schlafly Kölsh.

Next week’s entree trial (hold onto your hats for this one): Smoked Pork Shoulder Cuban Panini