I managed to make it out of Cincinnati no worse for the wear. Although I regrettably did not get to Graeter’s Ice Cream, we still had a great time at the aquarium, Skyline Chili, Dewey’s Pizza, and at their epic beer shop, Dutch’s. Aside from being a restaurant and wine bar, this place has a massive walk up window of beer from around the country and across the globe. It’s a little overwhelming the first time you approach it, so much so that I had to make two different trips during my visit.

What else would I do while there but crush some local brew. How about some Mount Carmel India Pale Ale? 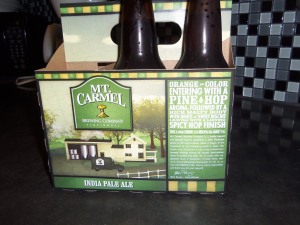 What's left of a six pack

Again, I go to the guy at the Dutch’s window and ask for some local brew. He recommends Mt. Carmel. Out of their many options, I picked the IPA. My bias comes through again. 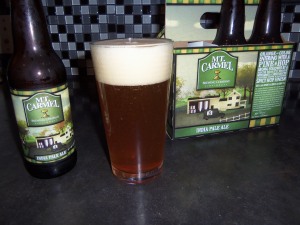 How about that great beer color?

I found this IPA to be very refreshing, but there was nothing distinct about it. I had it with some spicy thai-ish chicken and pasta. Based on the mild hoppiness, I was a little surprised to see the 56 IBU. This is a very crisp, perky beer with a mild fruity finish and a full 7.0% ABV. I was not overwhelmed by any of the hops bitterness, but you could enjoy this beer by itself or with any number of foods. My hefeweizen-loving wife did not care for it, but my sister-in-law had a couple.

Check out the excellent color in the beer. It’s slightly cloudy with an amazing amber haze, and a nice robust head. Good all-around beer, but nothing about it made me say “woah”.

In the end, I would buy this again. Probably a great compliment to a hot midwest summer day. My recommendation for Mt. Carmel IPA: Drink This Beer