If you have read any of my Drink This Beer posts, my affinity for ales, particularly English-style ales, should have come through. As such, I am a big fan of Fuller’s, an English brewery with over 150 years of heritage. I’d estimate that my favorite beer, if given the chance to pick one beer amongst others, is Fuller’s 1845. It’s a balanced, delicious, English strong ale. I could drink it with any meal at any time, or with no meal at all. I won’t review it here, since my goal for Drink This Beer is to try new things. However, you need to try that beer.

When I took a trip to England a few years ago, I had lots of Young’s and Fuller’s, including plenty of Fuller’s London Pride – another favorite you can get in six packs in the States. What all this means is that I hold the Fuller’s people and their brewery in high regard. This gave me no hesitation in selecting Fuller’s Organic Honey Dew. 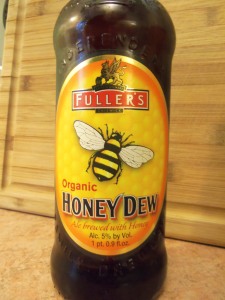 Honey Dew beer in a bottle

I cracked it open and picked up on a slight but notable sweetness. Once in the glass, it has much more of a lager appearance than an ale. The color is a nice light amber, almost a yellowish hue. Easily the most translucent of English beers that I’ve sampled, though the poor quality of my photo below makes it look darker than it really is.

I am a little surprised how much the flavor of honey comes through in the finish of this beer. I’m not just talking sweetness in a sugary sense, but the actual taste of a teaspoon of honey.

It’s as crisp and refreshing as you might expect from looking at it and seeing it poured, but there is a strong honey flavor. I guess the brewer got a little reckless in squeezing his plastic honey bear. If you don’t like honey, you will hate this beer. If you like sweeter beers with a refreshing finish, then this might be for you. It’s not a good example of English-style ales, but it is an interesting change of pace.

I don’t have any idea what I would pair this with in the ways of food. It’s that distinct. 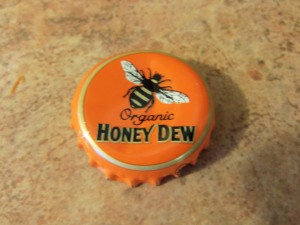 Definitely unique, something I can have one of every once in a while. If you are some kind of honk for organic stuff and like sweeter beers, give this a shot. I liked it in moderation. My recommendation for Fuller’s Organic Honey Dew: Drink this Beer