There’s something magical about 8.0 ABV beers that get me excited. Hop Stoopid is one of those beers. 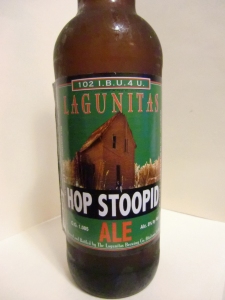 Is there a Stoopid amount of Hops in this? Only one way to find out...

I cracked the bottle and put my nose in the vicinity of the bottle. Immediately you pick up on a rich, tree fruity aroma. It’s very inviting and looks great in a glass. Plus, the bottle cap is pretty cool – who doesn’t love Labs?

You have to almost pour it recklessly to get any head on the beer. Again, as you pour it gives off an amazing aroma. The hops are palatable before you even drink it. Perhaps someone at Lagunitas did get Stoopid when adding the hops. Let’s have a drink.

Great, light color. Not much head.

Holy shit. Imagine taking some mash of hops and malt and putting it in both cheeks of your mouth, then sipping the beer. As you do, someone sprints towards you with a wet hop bag just removed from the brewing cycle and clubs you over the face. That’s essentially the experience of drinking this beer. It’s quite nice.

And why not. This has a whopping 102 IBU, which stands for International Bittering Units. About.com notes: “Beers with IBUs greater than 45 are heavily hopped and can be quite bitter.” Oh, really? No joke. Half of this big beer is gone and my stomach is going insane.

During the course of typing this post, the high IBU and high ABV have begun to take effect. This is a good thing, but this is definitely a one-beer-per-sitting beer.

I’ve never heard of Lagunitas Brewing Co. (of Petaluma, California) before buying this beer in the Impulse Beer section at Schnucks, but I’m glad I gave it a shot. If you are a fan of hops, then give this a try. If not, steer clear.

My recommendation for Lagunitas Brewing Company’s Hop Stoopid: Drink This Beer (at your own peril)