I once entered a BBQ beans contest. One of the judges told me that I made the best beans he had ever eaten. Nice, but I didn’t win. I will try to replicate the recipe I made that day when I was many ABInBev products deep.

Beans: 1/2 lb each of dry red and black beans, soaked for 24 hours in cold water. They were rinsed twice after soaking.

I chopped about 3/4 lb sliced bacon and mixed that into the bean / sauce mixture, then put it on the grill.

I put it over direct heat with plenty of coals. I am using a restaurant-grade sauce pan from Sam’s Club with a silicone grip. 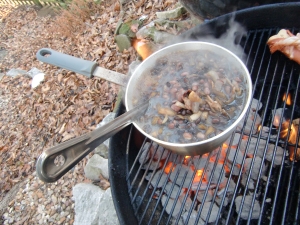 I wish you could smell this...

Stir frequently. Eventually all of the pork fat will break down from the bacon and the sauce will thicken. You don’t want to burn the beans at that point.

After an hour or so, most of the bean liquid will have boiled off, but the beans won’t be done. Be prepared to add one or two cups of hot/warm water to the beans and stir. This step will need to be repeated as the beans cook.

You will probably need to add more coals as the fire dies down. Start with a rolling boil and let it simmer as it cooks.

Hey, this would be a great time to crack a (case of) beer. 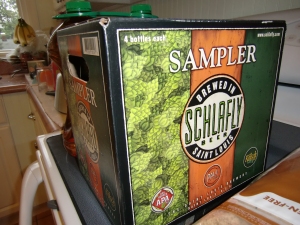 The thing to remember about beans is that they can take a really, really long time on the grill. Keeping them wet will prevent burning. If you ever hit a moment of panic, as I did recently, pour your newly-opened beer into the beans. It’s a hearty flavor and gives something else liquid to burn off.

Once the beans are done, you can chop up some fresh parsley and maybe some cilantro. I added some freeze dried chives this time. All of the pork fat can thicken the beans significantly, to the point that they get a refried beans texture if you let them cool too much. Before eating, may I suggest a little Beano.

You are going to get three serious flavors at once: Sugar, bacon, smoke. The beans are not the star here. You can taste the BBQ flavors, as opposed to if you had cooked them on a stove top. Seriously, though, the sugar comes through strongly. If you don’t have a sweet tooth, cut the brown sugar down from 1 1/2 cups to a half cup and omit the apple juice.

When I entered this in a competition, I used a bunch of brown mustard, possibly even a whole 12 oz bottle. It was a long day and the beer truck was nearby / bottomless. Who can really say for sure.

As an aside, I once made these with some salted pork belly (with the skin on) that I smoked for about two hours. It was epic. Maybe I’ll try that again soon.

Clean Up: Cooking with a sauce pan on the grill coats everything in a brownish / blackish layer of smokey gunk. Just get some Dawn dish soap and a coarse sponge to clean it up. It comes off surprisingly well, but the nooks and crannies of the pot will be tough to clean. I infuriated my wife using a nice pot on the grill a few years ago, so get some dedicated BBQ cookware if you want to avoid the couch.