I’ve made this BBQ recipe with great success in the past. If you prep everything in advance, the BBQ process is quite easy. It’s really simple.

Make a “bed” of bacon. I used a 9″ x 13″ glass pan and lined up the bacon so that they slightly overlapped each other.

I cored an apple and sliced it, followed by a generous helping of gorgonzola cheese.

Who will sleep in this bed?

Mr. Tenderloin followed. I repeated the layering of apple and gorgonzola cheese. 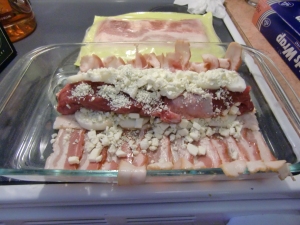 Someone needs to be tucked in

After it’s wrapped up in bacon, I let it sit in the fridge overnight. It doesn’t necessarily need to rest overnight. I was just prepping a day in advance. Once it’s grill time, I put it on a wood soaked cedar plank over indirect heat in the Weber 22″. (At this point I would normally brush the outside of the entire thing with some olive oil, but I forgot to do it this time.) 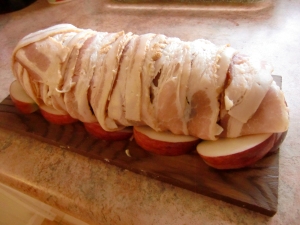 I let it smoke on the plank, with some of my leftover soaked hickory wood. It sat for two hours.

Things have gone well. The cheese has not escaped, though the bacon is a little blackened.

This is a seriously easy BBQ recipe and technique. The bacon fat seals in a lot of the moisture and the sliced apples supplement what would be lost. The plank prevents the bottom from burning and provides an amazing smoky flavor. You can omit the gorgonzola (as my kids prefer) if that’s not your thing. Good luck!